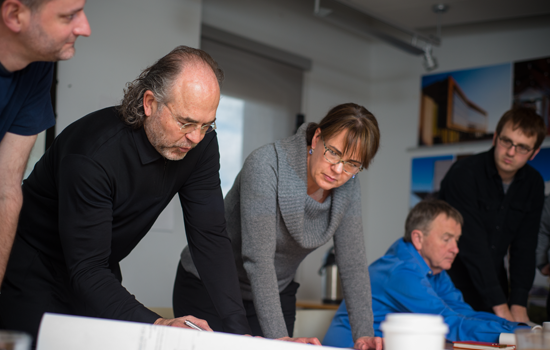 BNIM designs buildings that do more than just look great, winning national awards for sustainability and energy efficiency. This success has led the company to expand beyond its Kansas City headquarters, launching seven new offices across the US. But when it came time for employees in different locations to work together, existing processes clearly were hampering growth. Each office had a separate network drive, making it difficult for colleagues and consultants in different cities to collaborate, especially when handling complex files like 3-D Autodesk Revit models. Proposal deadlines snuck up earlier than expected, as architects needed to upload files onto the server the night before the due date, says Erin Gehle, Director of Communications. “We had to build in large margins just for communication,” Gehle says. When outside the office, architects had to wrestle with VPN and project management software, a struggle that repeated itself every time anyone made an edit. “Our existing tools didn’t perform when we shared large Revit models,” Paul Waters, Director of IT says. “Some other mechanism had to be used.” To get around all these issues, employees started using Dropbox personal accounts under their BNIM email addresses. After evaluating a number of enterprise cloud providers, there was little surprise that Dropbox Business emerged as the clear winner. “From a device agnostic viewpoint, Dropbox Business was the easiest to operate,” Waters says..

For BNIM employees, the process of going from concept to blueprint has become a lot smoother since deploying Dropbox Business. Gehle says that instead of spending hours working around a server’s restrictions, employees quickly initiate a file request, which guides recipients to add content to a specific folder. “When a consultant looks at a proposal and wants to see an alternate image, it’s a very simple process,” she says. Teams of architects and engineers now easily iterate on models in shared folders. When ready to send designs to customers, they use shared links, which have eliminated concerns over file sizes or types. And BNIM employees can now share many of these documents with clients on mobile devices, making it easier to visualize early concepts when on job sites. “Working on my phone is a much more seamless experience now, versus loading email or trying to download a file,” Gehle says. Moving to Dropbox Business has also provided BNIM with the necessary peace of mind that its proprietary company documents are always secure. Waters calls the Admin Console a “saving grace,” giving BNIM greater control over data through features like remote wipe, which lets IT delete files from devices when employees leave the company.

“It has just completely transformed our ability to react quickly. It increases our reputation for being responsive, aware, and interested. And clients appreciate that.”

Dropbox Business is helping BNIM employees save time—just as the buildings that the firm designs are helping clients save energy. “No more late nights up transferring files back to the network,” says Gehle. The faster turnaround times have also been noticed by customers. “It has just completely transformed our ability to react quickly. It increases our reputation for being responsive, aware, and interested. And clients appreciate that.” BNIM’s IT department has seen a similar effect on speed and efficiency with Dropbox Business. Waters estimates the service has reduced IT management overhead by 40%. “For example, instead of asking a user who lost a file ‘which day do you want it restored?’ users can do it themselves,” he says. As a business-savvy IT team, this time saved helps BNIM remain at the cutting edge. “We’re striving to put BNIM on the edge of technology and look at all emerging ways to enhance the design process,” Waters says. “So having this reduction in overhead is fantastic.”