The nation’s first and only certified 100% grass-fed organic dairy brand uses Dropbox Business so employees can collaborate on the go, resulting in better service to distributors and lower IT costs for the family-run business. 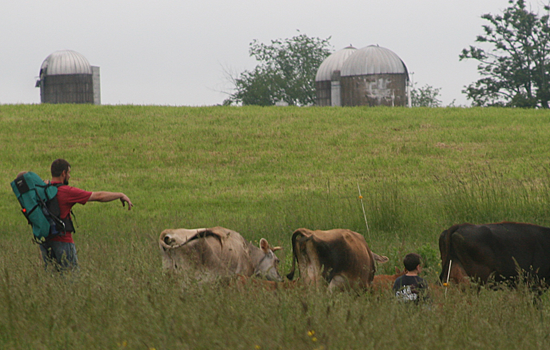 Milking more out of technology

Like many small businesses, Maple Hill Creamery started on something of a whim. Fed up with corporate life, founder Tim Joseph purchased land in upstate New York in 2003, fulfilling a childhood dream of being a farmer. Next he bought dairy cows, thinking he could ditch his day job with the money he’d make from selling the milk. “Of course, it never worked because there’s not enough money left over to replace your paycheck,” he says. He decided he’d need to uncover a niche, eventually settling on making yogurt, cheese, and other products from 100% grass-fed dairy. As the idea caught on, it became harder for employees, who mostly work remotely, to collaborate. “We were emailing at first,” says Joseph, “and when we started to do actual nice, professional PDFs and things, the attachment size got to be an issue.” Employees signed up for individual Dropbox accounts to make it easier to share files with colleagues and distributors. Once Maple Hill began shipping its products coast to coast, Joseph decided to upgrade to Dropbox Business to gain more storage and control. “It had more functionality in the ability to administer accounts—and more space,” says Joseph. “It just seemed like the right fit for a growing business to do it sooner rather than later.”

“We’re able to do things you could do in the past only with a full-fledged IT department. So it keeps us very small and nimble. We don’t have to think a lot about the mechanics of sharing.”


Enabling people to work from anywhere

Now 16-employees strong, Maple Hill uses Dropbox Business to keep employees working in sync even though most don’t work at Hudson Valley HQ. A shared folder lets sales access the latest sell sheets, product one-pagers, and other collateral regardless of whether they’re in the office or on the floor of a trade show. “Basically all of our marketing stuff ends up in a Dropbox folder,” says Joseph. “That way we know everyone is getting the same—and latest—version wherever they are.” Maple Hill also created shared folders for each of the 79 farms that supply milk to the company to distribute contracts, organic certificates, and other key documents. The company uses sharing permissions in the Admin Console to make sure that only the right people have access to folders. This set-up spares Maple Hill and its nearly 80 milk-supply partners from struggling to track down email attachments. “It’s just made it a lot easier to share things when you know it’s all on Dropbox,” says Joseph. Employees are big users of the Dropbox mobile app, especially the company’s milk supply manager who crisscrosses New York state discovering new sources of 100% grass-fed organic milk. “She can be on a farm anywhere and basically take a picture of their organic certificate and pop it into Dropbox on her iPad,” says Joseph. The Dropbox badge has come in handy too, Joseph says, for collaborative tasks such as updating the milk supply route in Microsoft Excel. The badge feature lets viewers share files and update to the latest version when someone else makes changes, all within Microsoft Office. “On a daily basis, several of us update the spreadsheet with the latest pounds of milk expected from each farm,” says Joseph. “The little bubble lets you know whether someone is editing it so you never lose work.”

“Dropbox Business had more functionality in the ability to administer accounts and more space. It just seemed like the right fit for a growing business to do it sooner rather than later.”

Freeing up resources for growth

Maple Hill has been able to expand into over 6,000 stores, in part thanks to its strong relationships with distributors that come from offering a great product with great service, says Joseph. When visiting new distributors, employees can send them materials on the spot with Dropbox links from their phones. “We’re a very responsive company,” says Joseph. “As a result of having it all at our fingertips, nobody’s left hanging. People know that when they reach out to Maple Hill, we take care of whatever it is.” Dropbox Business also allows Maple Hill to keep IT costs low, as it doesn’t need to maintain file servers. This frees up more resources to focus on making some 32 different SKUs. “We’re able to do things you could do in the past only with a full-fledged IT department,” says Joseph. “So it keeps us very small and nimble.”