The artisan coffee brewer uses Dropbox Business to manage all aspects of its business, from collaborating on beverage recipes to managing finances. 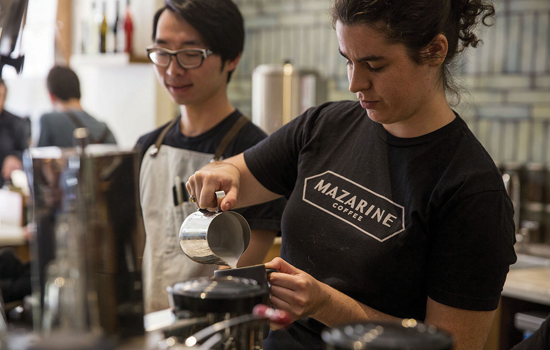 To cater to today’s coffee-crazed public, many artisan coffee companies are increasingly sourcing the finest beans and roasting them in-house. But, as Hamid Rafati sees it, few focus on the actual brewing process, meaning the customer often ends up with a mediocre beverage. Rafati plans to change all that with Mazarine Coffee, concentrating instead on developing recipes and training staff to prepare the perfect cuppa. “That way we can actually be the experts in making that coffee” says Rafati. The former design engineer wanted to create a collaborative environment for employees that would lead to a new kind of coffee experience in San Francisco. He concluded that relying on email to share recipes and other files with his staff would quickly lead to confusion over who had the latest version. Having already used Dropbox to store and share personal files, Rafati decided to roll out the solution’s business version for his small business. “Once I founded Mazarine, I realised I could get a business version of it so all employees could have access” he says.

“Dropbox takes care of the things I no longer have time for, meaning I can focus on things related to the business. I have more time to actually train baristas and train people on customer service.”

Today, Mazarine Coffee runs most of its operations on Dropbox Business. Baristas developing a new café mocha recipe in an Excel document, say, will upload it to Dropbox so that Rafati and others can contribute to it easily. The Dropbox badge ensures nothing gets lost as it lets users update to the latest version when someone else makes changes. “If you have two versions of something, there are always going to be inconsistencies” says Rafati. “Dropbox takes care of the things I no longer have time for, meaning I can focus on things related to the business. I have more time to actually train baristas and train people on customer service. That’s what I think Dropbox resolves.” Dropbox Business makes it easy for Mazarine Coffee employees to keep the business humming along, even when they’re not in the Financial District location. Rafati uploads all of the PDF invoices he receives from coffee roasters and other suppliers into a Dropbox shared folder, allowing his accountant to access the folder to pay the bills. Using the admin console, Rafati can control who can see sensitive company information. “My accountant is the only one who has access to the accounting folder” says Rafati. “I’m easily able to share the appropriate folders with the appropriate people”. In 2014, Dropbox played a key role in the construction of Mazarine Coffee’s store. When Rafati met with architects, contractors and tradespeople, he’d pull up the building blueprints and other documents on the Dropbox mobile app on his iPad. “Everyone wanted to have access to these documents, make changes and so on” he says. “Dropbox was really ideal”.

“If you have two versions of something, there are always going to be inconsistencies. That’s what I think Dropbox resolves.”

Focusing on what matters

Dropbox Business is helping Mazarine Coffee focus on building the business by making it easier for employees to share and collaborate, says Rafati. “Dropbox takes care of the things I no longer have time for, meaning I can focus on things related to the business” he says. “I have more time to actually train baristas and train people on customer service”.