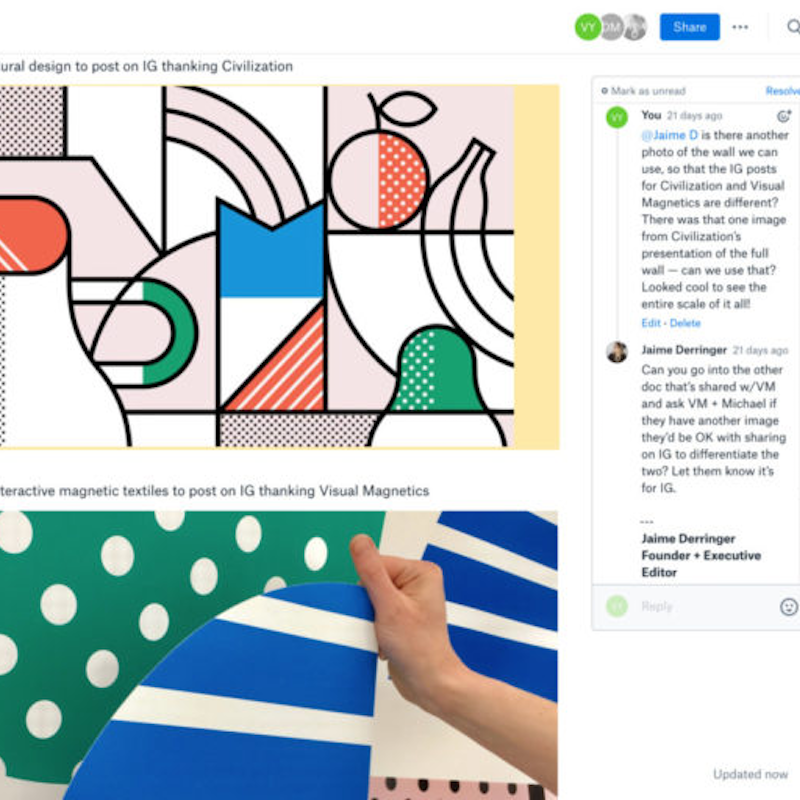 As a company without a headquarters, Design Milk relies on digital tools to collaborate on large-scale projects that have many contributors and multiple moving parts. To plan the Milk Stand pop-up shop at ICFF 2017, they needed to bring together a team of remote designers, project managers, and editors. To keep everyone on the same page at every stage of the creative process, they knew they would need a cloud-based ecosystem with a simple interface. So they turned to Dropbox Paper.

"Design Milk loves seeing a minimalist approach to design," says Vy Yang, Associate and Travel Editor at Design Milk. "And that’s exactly how the designers at Dropbox approached Paper, which was important to us because the last thing we wanted was to hold up our team and the project’s development with a tool that had a high learning curve." One of the aspects the team appreciated most was how easy and intuitive Paper is to learn. Vy estimates that it only takes about 15 minutes to get started.

To develop their pop-up shop, Design Milk had to divide up duties between various teams. Paper helped them stay on track by enabling them to assign a task and due date to specific team members by tagging them with an "@" mention.

"By the second conference call," Vy recalls, "Our Milk Stand team collectively agreed that the features in Dropbox Paper made it easy for us to collaborate remotely and keep the flow of the project moving."

The team says what makes Paper most valuable is the way it promotes effective collaboration. By enabling them to invite an entire team into a single, shared doc, Paper proved especially help during conference calls.

With features allowing them to develop, manage, and share ideas no matter where they were working, remote collaboration became as easy as working together in an actual, physical conference room. Paper served as a central hub where collaborators, content, and communications could be accessed in one all-inclusive document.

A complement to the tools you use every day

The more the team became familiar with Paper, the more they realized that it wasn’t designed to replace all their favorite apps—it was designed to complement them.

"Nobody wants another document to keep track of and we sure didn’t want to assign another burden onto our team," says Vy. "As the Milk Stand developed though, we found ourselves eliminating the need to go into other platforms because our Paper document had everything we need: mock-ups, floor plans, task lists, schedules, timelines, and more."

With one centralized space accessible to everyone on the team, they found they no longer needed to go searching through tabs and emails to find the assets and attachments they need. As the project progressed, they noticed they’d naturally come to rely on Paper as their primary workspace.

Another aspect the team appreciated was being able to streamline their docs by creating quick tables from the toolbar (instead of complicated formulas).

"You won’t find unnecessary functions in Paper. Here, it’s the quality of your work that shines, not the fancy formatting you put on it, and the instant save feature means you never have to worry about losing your work when your computer freezes and you haven’t hit save in a while." —Vy Yang, Associate and Travel Editor, Design Milk

Paper’s auto-generated table of content was another favorite feature. Any time you create a header, for example, Paper automatically puts it in the table of contents that appears when you hover your cursor on the left side of the screen.

Comments that become conversations (and de-clutter your document)

As the team reviewed their works in progress, they liked being able to leave comments in context next to the work itself. Because they were navigating through multiple comments from multiple authors in any given doc, having a clear way to know when an issue was resolved helped a lot.

Their favorite feature is the opt-in emails that provided the team with timely notifications whenever the doc had been updated. This allowed everyone to know exactly who, what, when, and where changes were made. They said this is especially useful as a project nears its final phase, and they need to add last-minute installers and manage multiple projects.

"We’ve recommended this platform to so many of our colleagues, friends and family because without a doubt, Dropbox Paper was the glue that held the Milk Stand together," says Vy. "After all was said and done, Dropbox Paper has earned a permanent spot in our online toolkit."