Olympic and Paralympic teams get the technical info and support they need to move closer to the gold—with Dropbox Business keeping them empowered and informed wherever they’re training or competing around the world. 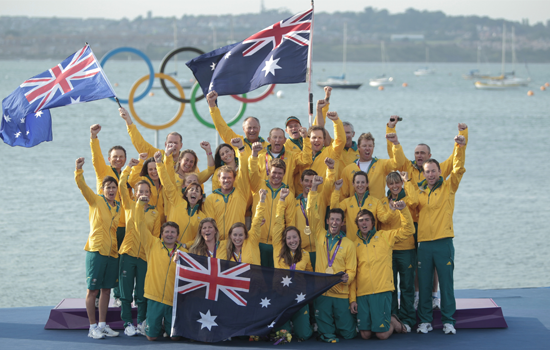 A server that wasn’t serving its purpose

With more than 50 athletes, 15 coaches, and 30 support associates, the elite group that makes up the Australian Sailing Team (AST) is always on the move—both in and out of the water. The team continually travels to different global destinations and venues, training for and competing in regatta programs, including the Olympics and Paralympics. Having access to strategic information on the road is key to the team’s success, but trying to retrieve it from file servers at the organisation’s headquarters in Australia proved to be a frequent struggle for members. Team members resorted to storing documents on individual laptops and using email to share files, but they encountered version control issues and weren’t always certain the most current information was getting into the right hands. In addition, there were concerns about security and exposure of technical secrets. After reviewing several solutions, the AST decided to adopt Dropbox Business. Program Manager Katie Culbert says, “We liked the security it offered, the ease of access, the user functionality, and the fact that we could share folders with specific people. The storage space was also a key factor. We just felt comfortable with Dropbox Business as a solution.”

“With Dropbox Business, we all have access to the most current versions of our documents—anywhere in the world—which is critical for a team that is all about performance.”

Now, no matter where AST members are in the world, they can quickly access the files they need to do their jobs and enhance competitive performance. If a technique needs to be altered or a sail needs to be cut differently, team members can work together to problem-solve, collaborating on plans in Dropbox Business. “Team members use Dropbox Business to appropriately share everything from training videos to performance analysis to details on athlete well-being,” Culbert adds. “It’s also used to share technical projects and programs with athletes, coaches, and staff. It’s really integral to team operations.” Because the AST’s cache of files includes sensitive information ranging from confidential medical data to professional secrets, security and sharing controls have been huge assets. Dropbox Business lets the organisation set permissions that ensure only the appropriate people can access files. “Even our most skeptical coach is convinced files are safe in Dropbox Business,” Culbert notes. “There used to be some paranoia around our technical secrets getting revealed, but Dropbox Business gives us a much needed level of control and security.”

“Coaches and athletes use Dropbox Business to share everything from athlete well-being details to training videos to performance analysis. It’s also used to share technical projects and programs with athletes, coaches, and staff. It’s really integral to team operations.”

A winning culture for the team

Since moving its files to Dropbox Business, the Australian Sailing Team has seen drastic changes to mobility and efficiency. With athletes travelling eight to nine months per year, and staff members on the road between two and six months, being fully operational at any location has been invaluable. According to Culbert, “We’re able to spend more time solving problems and getting things done, rather than trying to resolve connection issues. We had so many problems prior to Dropbox Business—I would say we’ve seen at least a 30% productivity improvement since setting it up.” By giving the AST advantages like flexibility, stronger connections, and file security, Dropbox Business plays a key role in furthering the team’s success. Culbert sums it up, saying, “I would recommend Dropbox Business to any team that has athletes, coaches, and staff with varying schedules, working in different locations. It helps enhance team operations and allows everyone to focus on the important factors that impact performance.”